It started with a spot.

Having been freshly painted in July 2010, by June 2011 it was apparent that all was not right at the top of Flatholm Lighthouse. Small dark patches were appearing in the otherwise pristine white finish. As these patches were about 25m above ground level and 5m below the lantern of a tower located on a small island off Cardiff in the Bristol Channel, taking a close look to see what was happening presented some problems. By May 2013 the patches had spread and the top third of the lighthouse looked like a candidate for an ink-blot test. Using rope access techniques the painting contractor who had applied the paint in 2010 found that the adhesion between the underlying rendered surface and the paint coating had broken down completely and paint was coming away in sheets.

The lighthouse on Flat Holm Island looks similar to any other white tapered tower from the outside, but the walls are about 1.5m thick at the base of the tower so the inside of the tower is much narrower than most other lighthouses. This causes the building to act rather like a cooling tower, and a change in the weather can cause condensed water to flow down the internal stairs as if someone has left a tap running. Over the years, all this moisture has permeated through the walls from the inside until it hit the impenetrable barrier of the external paint. The render beneath the paint became saturated until the paint could no longer stick. In March 2014, we decided the only way to cure the problem was to strip all the paint off to a sound surface and start again. This was planned to start in April 2015.

In order to work on the external walls the tower had to be scaffolded. This meant that 30 tonnes of scaffolding had to be delivered; not an easy task when the normal boat landing is a quarter of a mile from the lighthouse and at the bottom of 20m of steps. 30 tonnes was broken down into 70 loads ready for flying onto the island by helicopter.

To add complications, a colony of black backed gulls nest on the cliffs just to the south east of the lighthouse, directly under the helicopter flight path.

Once the scale of helicopter operations became apparent, we were advised that we would not be able to fly until the birds had fledged and left the island, which wouldn’t be until the end of September. This meant that by the time we had the tower scaffolded and the old paint stripped off we’d be trying to apply the new paint coating as the weather starts to deteriorate in late autumn. Our only window for flying would be between October and January. In January 2016 we delivered the 70 loads, ready for when the weather improved in March.

In March 2016 the scaffolding was erected and the paint coating removed. Unfortunately, what lay beneath was not a pretty sight. The render that had been applied to give the stone built tower a smooth appearance was beginning to fall off over the top third of the tower, with large areas below that also loose. The ‘sound surface’ we had expected to lay beneath the paint was not there. The render had been applied when the tower was built in 1737 varied in thickness from 2” to ½” and had been patched, repaired and bodged for 250 years. Our sound surface lay beneath and so the render had to be removed as well. A local contractor was employed and—due to the loose and friable nature of the mud-based render—the tower was stripped in just over a week. The next task was to apply new render.

Despite being a listed building we were given the option to use various render systems but with consideration of the damp problems we’d had over the years, we decided to apply a traditional hot lime render, albeit reinforced with a nylon mesh below the external finish coat. Trying to find someone to apply such a coating became another problem; the few contractors who have suitable skills tend to be small concerns and they were already committed on other projects. By the time everything was in place we were into the autumn again, with the risk of frost damaging the render as it is applied. Another year gone. The autumn/winter of 2016 was spent working out how to get the 25 tons of new render on to the island and remove a similar amount of old render.

Due to the restrictions on helicopter flying—and following a suggestion from the warden on Flat Holm—we sourced a landing craft which could deliver the render together with a telehandler and trailer to transport the render from the west beach to the lighthouse.

In February 2017 all materials were delivered to the island and in March, once the risk of frost was passed, four coats of fresh render were applied: one ‘dubbing out’ coat which evens out the worst of the roughness of the stone, then the ‘scratch’ coat which forms the overall shape of the tower. Next is the mesh coat which incorporates a nylon mesh bedded into the render to bind it all together and then the final ‘finish’ coat: a thin layer to provide a smooth surface for the paint. By the middle of April the render was able to start carbonating or hardening off, a process that takes about a month as it absorbs carbon dioxide from the atmosphere.

Finally, in June 2017, with the scaffolding removed from the tower, the painters were able to return and apply a fresh coat of lime based white paint to restore the tower to its original appearance, standing proudly in the middle of the Bristol Channel. 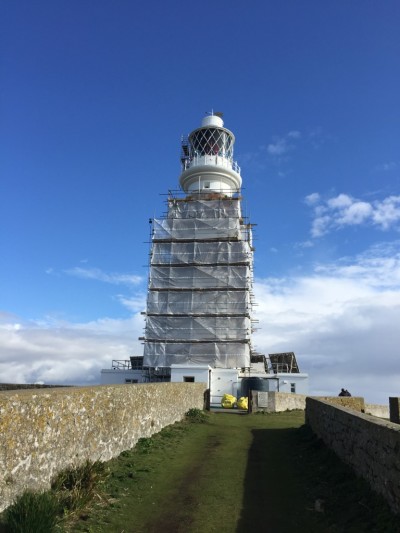 Flatholm Lighthouse was built in 1737 in the busy shipping lanes where the Bristol Channel meets the Severn Estuary; the tower was re-engineered in 1820 and 1866

Piloting in a Pandemic