She described her recent experiences on the scheme:

One of the main reasons I wanted to do my cadetship with Trinity House was due to being able to gain experience on a wide variety of ships. Never in a million years did I think I would find myself stood on the dock at the Her Majesty's Naval Base Portsmouth about to join a brand new first of class Royal Navy ship, an Offshore Patrol Vessel (OPV) called HMS Forth, and gain accredited sea time while being on board.

I had a vague idea of how much training the Royal Navy does before even setting foot on a ship, so to say I was nervous in those initial moments is an understatement!

I was welcomed on board by one of the Young Officers (the Royal Navy’s equivalent to a cadet) and shown around the ship and were I would be staying. The ship is a much different layout to anything I have grown accustomed to and I spent the first few days getting lost but there was always a friendly face to show me the way.

My nerves quickly went when I found how welcoming and helpful the crew were, especially when I found myself almost immediately in at the deep end and being involved with all aspects of the ship’s various routines. HMS Forth was undergoing FOST (Flag Officer Sea Training) and OST (Operational Sea Training) to ensure both ship and all crew were up to the correct standard and able to cope with the various and worst-case scenarios she could encounter while at sea.

We set sail from Portsmouth, the first time—for both the ship and me—under a white ensign. The duration of my time on board was spent in UK waters around the south coast.

The next few weeks consisted of a variety of sea trials, endorsements and of course many drills. I was able to do something from every aspect on the ship, from everything on the bridge to being on watch and giving traffic reports (unlike the Merchant Navy, every vessel within a set range must be reported to the captain); I took part as a team member in various drills including damage control, fire and man overboard. I was even given an opportunity to follow the weapons engineers and shown how to fire a GPMG [general-purpose machine gun]!

It was particularly interesting, from a cadet perspective, to be able to see and discuss differences and try some of the different ways in which both the Merchant Navy and Royal Navy operate.

I believe this assisted me in my Deck Officer training by seeing a wider variety of ways to complete an objective. It was a fantastic opportunity to get involved and widen my experiences. As with any cadet, I was always more than happy to get involved and offer my services as a guinea pig when the opportunity arose. The image to the left shows me assisting (as a not-so-glamorous assistant) in a sea survival brief on how to don survival suits and lifejackets.

Likewise, if there was ever an opportunity to have a go or take part, officers went out of their way to ensure that I could in order to get the most out of this opportunity, or were more than happy if I wanted to have a go. This enabled me to gain the set tasks required in my Training Record Book.

When the time came for me to leave, I was sorry to have to go!

Lt Cdr Carter added: “Bethany has been a super pilot for formalising this exchange and the Royal Navy is liaising with the MCA on mutual training recognition for sea time accreditation. We have more to follow on HMS Forth and the next OPV HMS Medway.”

The Royal Navy has berths allowing for 80 Merchant Navy Engineer Cadets every year; this is part of a mutual Royal Navy to Merchant Navy training exchange, as the former works towards full MCA qualifications.

“We have an enhanced industry sponsored RN Fastrack Maritime Scheme under MCA Memorandum of Understanding to ease and improve RN to MN resettlement pathways as part of our Maritime 2050 policy commitment; the future is RN and MN together for win-wins on multiple paths. This last year has seen 145 RN to MN liaison voyages, and that number is growing as Royal Navy personnel join Merchant Navy ships to gain STCW-accredited training time. The Royal Navy wants to return that favour by making the best use of our training berths.”

This article originally appeared in the autumn 2019 edition of Flash 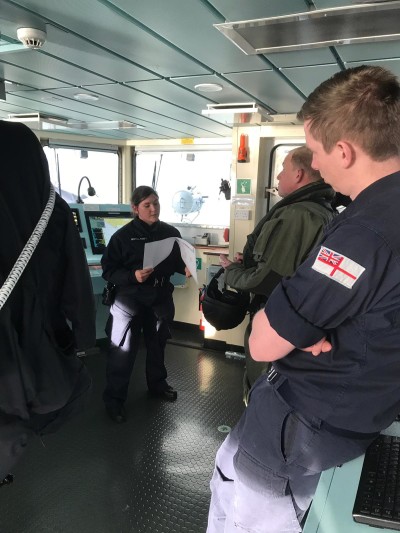 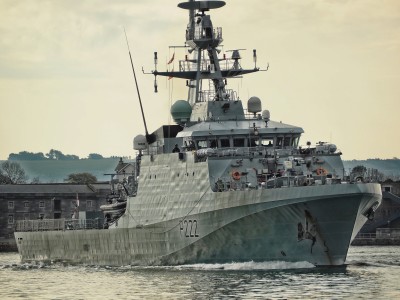 Previous cadets talk about their experience