Perched on the red sandstone cliffs of the Cumbrian coast, St Bees Lighthouse was established in 1718, although the current tower dates from 1866. The height of the cliffs mean that despite the modest stature of the tower, the light is the highest in England, at 102m above sea level. From the vantage point of the tower, the views across the Irish Sea extend to Scotland to the North and to the Isle of Man with Ireland beyond to the West. The lighthouse is managed and maintained from Trinity House’s Swansea Depot.

Since 1999, the 18NM (nautical mile) light has been provided by a cluster of three 250W halogen lamps mounted in the original 1866 lens. The life of the halogen lamps is short, needing to be replaced every three months before the light output degrades. The lamps are fitted into bases with spring terminals, and the repeated heating and cooling as the lamp flashes means the springs lose their tension and the bases have to be replaced annually. The bases are no longer manufactured and so the practical life of the light system was limited. It was time to find an alternative.

In late 2019, an LED alternative to the halogen lamps was identified and so we made plans to install a new light source in 2020. As we all know, plans for anything happening in 2020 were thrown into disarray by the onset of the COVID-19 pandemic. This required a creative approach to the project.

Whenever new equipment is to be fitted to a lighthouse, one of the first tasks is to visit the station to take measurements and establish where the new kit will go. We have drawings which detail a certain amount of the information, but representing a circular room on a flat sheet of paper (or a flat computer screen) has limitations. The travel restrictions imposed by the pandemic meant that travelling the over 300 miles from Swansea to St Bees was not possible. Fortunately since the advent of digital photography we have a large library of images that help to jog the memory and give context to the drawings. Being based in Swansea, remote access to the library and electronic transmission of drawings to Harwich is established practice. Working from home was not significantly different. Once the design was complete and equipment was purchased and delivered however, the process became a little more unusual.

New equipment is usually assembled and pre-commissioned in the depot. It allows settings to be verified and performance to be checked before taking it to site. It is set to run for a period of time so it can be monitored for any failure. When you’re in the depot daily, monitoring is simple. With reduced numbers of staff in the depot, it’s not so straightforward. As a result, I ended up with a lighthouse in my study at home. The light source, control equipment and a power supply sat behind my computer and enabled my teenage son to see his way to the kitchen for midnight snacks. A cardboard tube around the light prevented me from being dazzled when the light came on in the darker evenings. By Christmas 2020, everything was ready to be installed.

"When you’re in the depot daily, monitoring is simple. With reduced numbers of staff in the depot, it’s not so straightforward. As a result, I ended up with a lighthouse in my study at home."

Planning the installation had to take into account the fact that COVID-19 restrictions were still in place. The set-up of the lighthouse meant that the three of us were usually working in three separate rooms, we stayed in separate accommodation and with no pubs or restaurants open, take-aways or self-cooked food was the order of the day. Lunch breaks were taken sat in vehicles instead of sharing the small kitchen area.

By leaving the original light system connected but moving cubicles to the floor or temporary supports, the new system was able to be fixed in place and connected up ready to be changed over. On 26 February 2021, the old halogen lamps were removed and the new LED light was installed.

The time spent poring over drawings and photographs paid off, dimensions matched up, cables were long enough and the new equipment all fitted where it was meant to. All that remained was to remove rather a lot of redundant equipment and cables and tidy up the installation.

The new LED uses 90W compared to the 250W of the old lamps while achieving the same range. Only half of the LEDs are in use at a time. If one should fail, the other half come into play. If a further failure occurs, a spare unit kept at the lighthouse can be changed out as quickly as changing a conventional light bulb. The life expectancy of the LED is somewhat greater as well. The predicted life is ten years and while we haven’t had one running that long, a similar unit measured after five years showed no signs of deterioration.

Shortly after the installation, a viewing trial by THV Galatea reported that the new light was clearly visible from 20NM on a particularly clear night. The station is ready to shine out across the Irish Sea for another 20 years.

This article originally appeared in the autumn 2021 edition of Flash 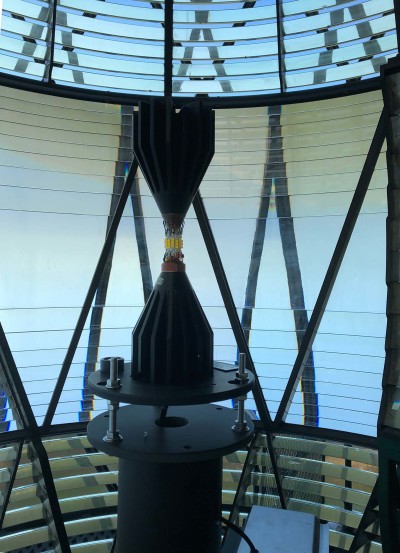 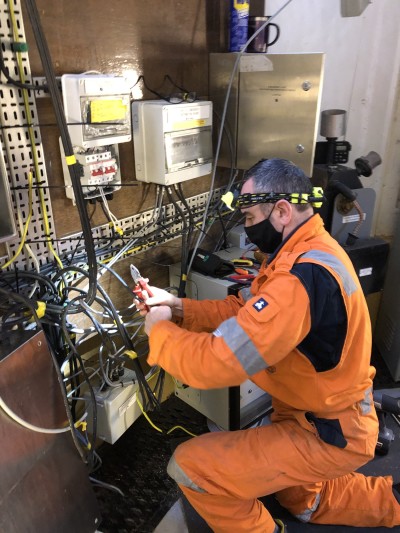 St. Bees Lighthouse was built by Trinity House in 1822 upon a high promontory to guide vessels trading between the ports of Wales and the Solway Firth