“I, the said Garter Principall King of Armes, have assigned, gyyen, and graunted unto their Corporacon aforsaid such Armes as they may lawfully bear in those necessary affaires of theirs as shall seme best: that is to say – argent, a plain cros geules, betwene four ships sable, the fore and top-sayles up, vnde underneath on a wreath of theyr colers, a demi-lion rampant, gardat, and crouned with a croune imperiall or, in his right pawe an armyng swoord argent, hylt and pomell or, langued and armed azure, mantled argent, doobled geules…”

Every once in a while, Trinity House has its coat of arms—its official insignia—re-drawn according to the above text; the passage is an excerpt from the Grant of the Corporation’s coat of arms made on 27 January 1573.

In 2017 we approached the College of Arms with a view to replacing our computer-drawn coat of arms with a professionally hand-painted interpretation of the 1573 grant; on 6 September 2017 the Deputy Master and the Secretary of the Corporation were invited to the College on Queen Victoria Street to receive the new coat of arms from Peter O'Donoghue, otherwise known as York Herald.

Deputy Master Captain Ian McNaught and Secretary Commander Graham Hockley were welcomed at the college and were delighted to be shown a number of historical ledgers containing hand-written descriptions and preparatory sketches for the Corporation’s heraldry going back many centuries. Thankfully we were also given the opportunity to correct a mistake in their records that had our date of incorporation as March 1513 rather than May 1514.

York Herald then presented to the Deputy Master the official coat of arms as a hand-illustrated ‘Library Painting’ on vellum; for general day-to-day use we have also been given a digitally-illustrated version.

The history of the coat of arms is referred to in a book written by a past Deputy Master Captain Joseph Cotton in 1818, entitled Memoir on the Origin and Incorporation of the Trinity House of Deptford Strond; provision was made in the 1514 Royal Charter for a Common Seal to “serve and seal for the business and occasions of the said Guild or Fraternity”. He suggests that it remained in use until the reign of Elizabeth I and goes on to say "Although no record exists thereof, it is evidently exemplified upon the monument of Sir Thomas Spert, Knight (Comptroller of the Navy to King Henry VIII and founder of the Corporation), as erected by that body to his respected memory in the year 1622, in a separate and distinct shield from his arms." The shield consisted of a representation of a three-masted ship with a banner flying from each of the mastheads, presumably that of St. George. “From this the arms in 1573… were unquestionably compiled in the improved spirit of that day.”

Captain Cotton then gives the text of the Grant of the Corporation's coat of arms as received from the College of Arms and signed by Garter Principal King of Arms Sir Gilbert Dethick in 1573. These armorial bearings consist of a white shield bearing the red cross of St. George; in each quarter there is a representation of a sailing ship of the Elizabethan period, in black, sailing upon the sea towards the observer's left. Surmounting the shield is an esquire's helm with white and red mantling and crest – a demi-lion, crowned and with its head facing the observer, in gold, holding a sword in the right paw. The motto ‘Trinitas In Unitate’ is borne on a scroll beneath the shield. 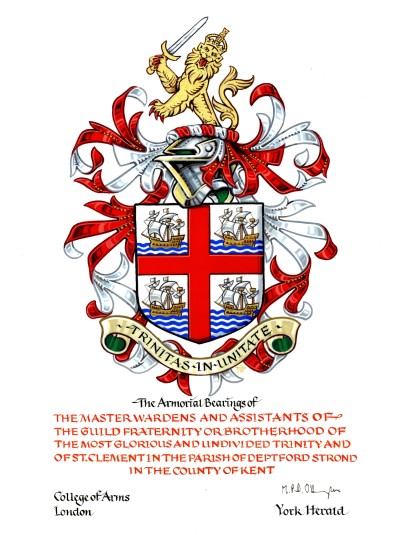 The re-illustrated coat of arms as a 'Library Painting' 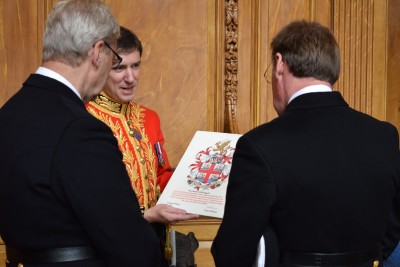