The plus side is traffic is light. It only takes twenty minutes to complete a journey which, in normal times, take up to an hour. Furthermore, there is never a problem finding a parking space. Apart from a sprinkling of vehicles, the car park is nearly empty. Since, all the office staff are working from home, the cars belong to the essential workers: Vessel Traffic Services (VTS) staff, berthing officers and, of course, pilots. All frontline workers or, as one wag put it, quay workers. But none are more frontline than the pilots.

As the coronavirus epidemic crisis developed VTS, quite rightly, took early steps to protect and isolate themselves as much as possible. They banned visits, identified their own designated kitchen and washroom facilities. The design of the building, shared by other office staff and pilots, meant that a stairway and access was also restricted for their exclusive use. Berthing officers, the personnel responsible for the preparation of the berth and the correct positioning of the ship, could also maintain social distancing. With the government lockdown, the office emptied but until then pilots shared facilities with the rest of the staff.

The nature of a pilot’s job inevitably brings him or her into close contact with others. Just to get to and from the ship will involve a combination of taxis and launches. Who had just been in the taxi? Who had the taxi driver been in contact with? As the crisis escalated the port authority tried to ameliorate this particular risk with dedicated cars and drivers. The launches themselves are kept clean and all surfaces are very regularly sanitised. By sitting at the back of the cabin the pilot could maximise the distance from the crewmen, but it’s not two metres. And what happens when the boat is carrying two or more pilots. Some pilots choose to wear masks. Simply put, it is inevitable that the pilot boarding an inbound vessel will already have been in close proximity to at least three individuals before he or she arrives at the bottom of the pilot ladder.

For a ship with no declared cases of COVID-19, the boarding is pretty much as it has always been. Some pilots have always worn gloves climbing the ladder, some don’t. I don’t, preferring to grip the rope and stanchions with my bare hands. Where coronavirus has changed my habits is that as soon as I reach the deck I use my hand sanitiser. On the way to the bridge, I try to avoid touching doors and other surfaces. (These days I’m more than happy to step back and let the crewman open the door for me). And, of course, definitely no handshakes.

Of all the restrictions and procedures that have been introduced in the wake of the coronavirus it is, perhaps, the absence of handshakes that seems the biggest change. The international symbol of friendship, welcome and confidence has been removed overnight. While the media have talked of the Wuhan Shake and Elbow Nudges, most Captains and myself seem happier to use the other ancient symbol of friendship – the raised open palm. But that’s okay in daylight. Before lockdown, I would arrive on a darkened bridge, blindly reaching out my hand, and it was quite reassuring to get the fumbled handshake from the Captain whose eyes were already adjusted to the darkness. Now I’m left loitering at the door until my eyes adjust.

And what is the bridge team wearing? Masks? Gloves? Either? Both? Even now, a month into lockdown, there is still no clear-cut decision on the efficacy of either outside the clinical setting. Shipping companies and individual vessels have introduced their own individual requirements. An Italian tanker company, perfectly understandably, has introduced a quite stringent procedure. Before entering the wheelhouse I’m required to dip the soles of my shoes into disinfectant and don surgical gloves and mask. But none of the ship’s staff wore gloves or mask. A few ships have managed to acquire electronic infrared thermometers, so my temperature is checked before entry, (invariably, if the design of the ship allows, I now always taken up the external stairway). On other vessels all the bridge team were also wearing gloves and masks. But they removed the masks to smoke on the bridge wing and to drink their coffee. At no point did I see them sanitise their gloves, though they were all using the same equipment.

Wherever possible, and I’ve successfully argued this on a number of vessels, rather than wear gloves, I prefer to frequently sanitise my hands and – as previously mentioned – try to touch any parts of the bridge as little as possible. Consequently, I find myself using my personal VHF radio in preference to the ship’s set. Similarly, the pilot’s personal unit (PPU – a pilot’s own electronic chart system) has the advantage that only my (sanitised) fingers have been all over it. Wearing PPE also has serious consequences on a pilot’s eating and drinking; it is impossible to drink a cup of coffee through a mask or eat a meal. So, with an apologetic shrug, on most ships it is not offered. Who knows, maybe they’re smiling under their masks. So, I content myself with a surreptitious sip from my own bottle of water – well away from others).

What is clear is that nearly all vessels are taking the crisis seriously. But not all. I will still board a vessel where life seems to have passed them by. No protective equipment worn, or expected to be worn by anyone. I’ve even had to refuse the Captain’s handshake. Though I have yet to meet the Captain who greeted a Cork pilot with the cheery welcome: “What’s the fuss, and why did you close all your pubs!”

While it might appear that the response onboard most vessels is somewhat piecemeal, this is certainly not the case on a ship that has declared that it has COVID-19 onboard. The pilot will wear full protective gear: gloves, mask, goggles and a protective oversuit. Wearing this level of protective gear generates its own problems. Just wearing a mask muffles speech, particularly difficult for the recipient whose first language is rarely English. Wearing gloves makes operating bridge equipment, especially touchscreens, awkward. Goggles have a tendency to steam up making compliance with Rule 5 of the ColRegs problematic! The oversuit inhibits movement. Overall, the general consensus is that the very necessary PPE is quite stressful and tiring to wear. The numerous pictures on social media of pilots in PPE with their thumbs up don’t tell the whole picture! They were almost certainly taken before or at the start of the job.

This is written in the middle of the crisis, I hope. (It’s the fourth week of lockdown in the UK and I – and the rest of the world – hope there are not many, many more months ahead of us). But the World Health Organisation are now saying people’s actions will have to change once this pandemic is over. (It has been said that after the bubonic plague the British stopped greeting people with a kiss on the cheek). Does that mean the end of the handshake with the Captain before and after an act of pilotage? I hope not, and I remain optimistic. Mainly because traditions at sea remain strong. And although another tradition has at the moment been regrettably suspended, I look forward to the day when the first question I am asked when I walk on the bridge is: “How do you like your coffee, pilot?”

This article appeared in the autumn 2020 edition of Flash 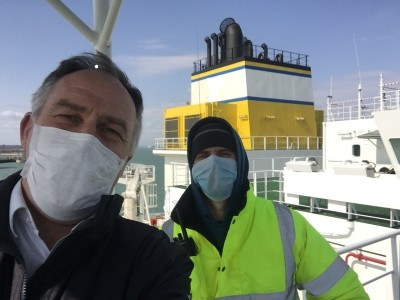 Lighting up during lockdown