The St Tudwal’s Islands are a small archipelago nestled about a kilometre east of the southern tip of the Llŷn Peninsula, in north-west Wales; an area of outstanding natural beauty famed for its unspoilt beaches, wildlife and considered a mecca by many water sport enthusiasts.

It is believed the islands were named after the eastern provided hermitage to Saint Tudwal during the 6th century. At the centre of the west island is St Tudwal’s Lighthouse, an important light not only to the local traffic but also to the many maritime tourists who visit this beautiful area and enjoy the internationally-recognised sailing waters throughout the year.

The lighthouse was first established in 1877 with the Chance Brothers second order fixed optic being the first occulting apparatus ever made by the firm. Lighthouse keepers lived on the island until its automation in 1922 when an innovative acetylene sun valve system invented by Swedish engineer Gustaf Dalen was installed.

The automatic acetylene system remained in operation for many years until the lighthouse was converted to solar power in 1995. With the aid to navigation equipment now being over 20 years old it had reached its end of service life, so a modernisation project was undertaken to update the station infrastructure to ensure the lighthouse provides this important aid to navigation reliably for the next 20-plus years.

As the islands play host to breeding grey seals and a wide variety of birdlife such as razorbills, guillemots and the rare chough, careful planning was required to minimise disruptions to these important island visitors while also maximising the best of the season weather.

The design work and procurement of equipment was completed in 2020, despite the disruptions created by COVID-19. Listed Building Consent was granted for a new internal handrail to improve the safety of the staircase; this was built and installed by a local blacksmith in February, designed to follow the curve of the stairs and complement the original handrail.

Mobilisation took place in April 2021 with the project tools and materials being transported by THV Galatea as close as possible to the island with the final delivery by helicopter carefully landing the loads into the lighthouse gardens. Three huts recycled from the Mumbles Lighthouse project in 2017 were erected to provide storage, welfare and—most importantly—somewhere dry to have a cuppa while the Welsh weather famously tried to dampen morale.

Ironically the weather could not have been better for the mobilisation, with glorious spring sunshine lighting up the Snowdonian backdrop, making quite the setting for what was Lighthouse Support Team Member Phil Miucci’s last trip away before his well-deserved retirement. Senior Technician Nick Chappell laid on a small farewell BBQ which went down extremely well.

The new LED light source was installed inside of the existing optic and the red filter material replaced to ensure the sectors remain within the IALA specification for a red navigation light. The efficiencies created by this latest aid to navigation technology allows the station to be supported year round with just two large solar panels and 20 buoy batteries.

The installation took place over a few months using members of the Field Operations team carrying out the works, being expertly supervised by Lighthouse Technicians Ian Arthur and Phil Horner throughout. A number of other improvements were undertaken including refurbishment of the WC and provision of a new portable generator.

The team stayed locally in rented accommodation and were transported to the island daily by the local boatman and lighthouse attendant Owain Lloyd-Jones and his two sons, using his boat launched via a tractor and trailer rig from Abersoch beach.

The island itself was sold into private ownership in 1935 and is currently owned by the TV adventurer and Chief Ambassador of World Scouting Bear Grylls, who holidays to the island every year with his family, living in the old keeper’s cottage. On a few occasions some of the team were lucky enough to meet Bear and his family when they popped their heads through the lighthouse door to say a neighbourly hello. Bear’s two dogs were often found seeking out members of the team for a good old belly rub too.

The installation was commissioned by Senior Project Engineer Jamie Hammond, with the new systems ‘going-live’ on 29 July. Demobilisation was completed using THV Galatea and the helicopter at the beginning of August, just before the arrival of a group of scouts camping on the island who would not have appreciated the down draft of a helicopter testing their tent pitching skills. 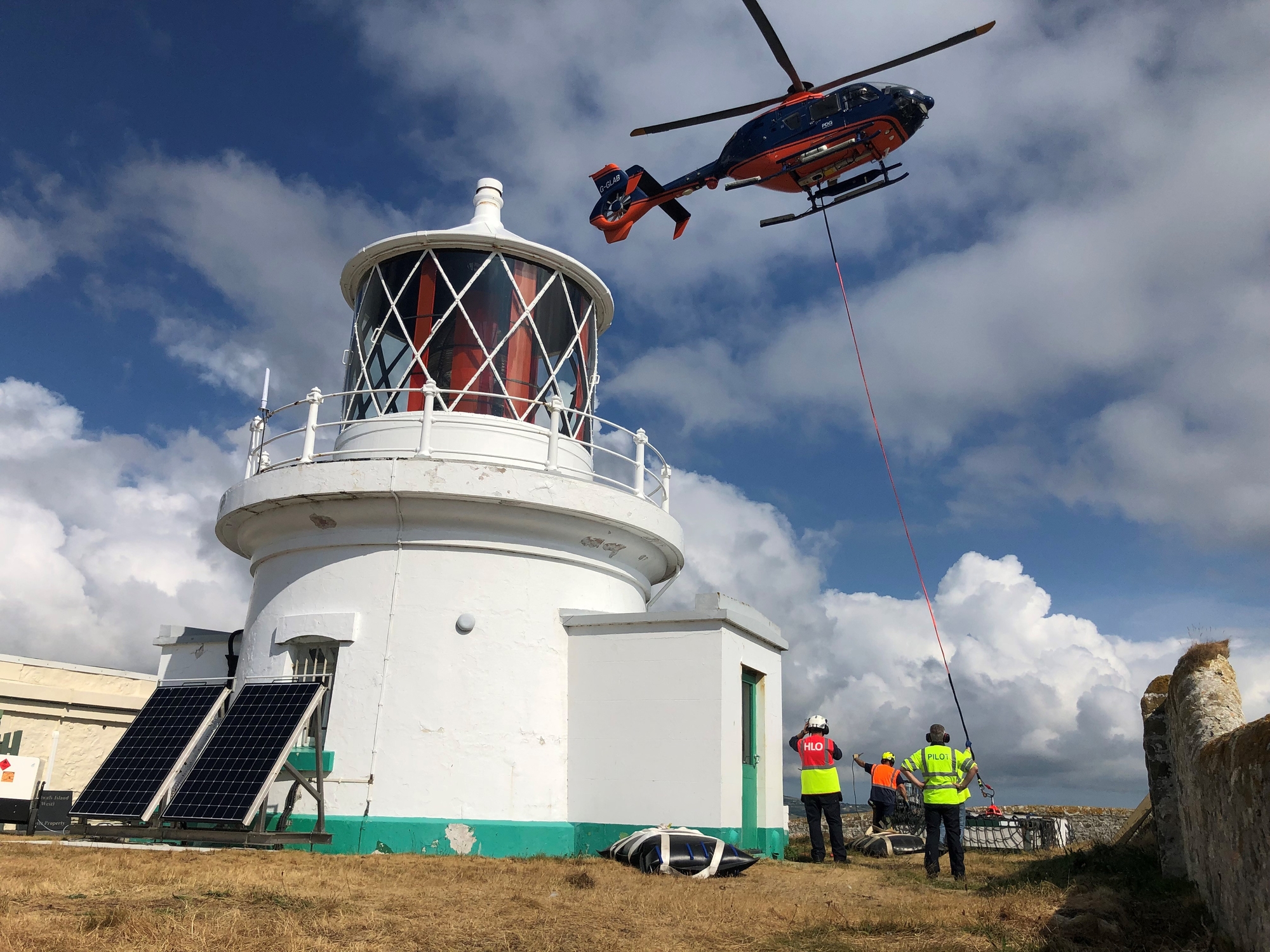 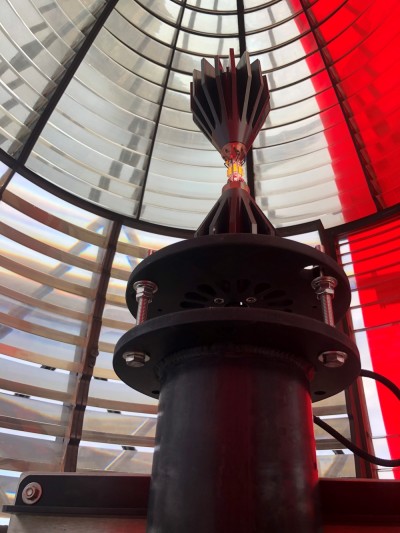 The new LED light inside the historical optic 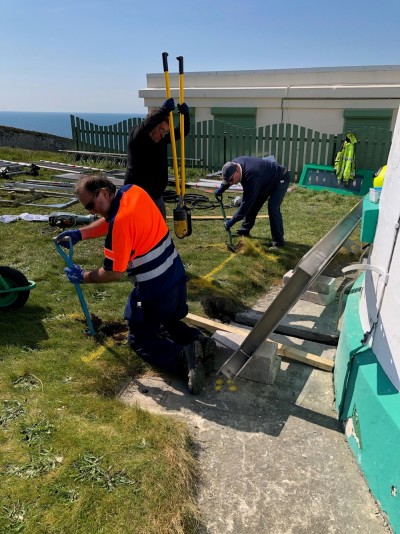 St. Tudwal’s Lighthouse was built by Trinity House in 1877 on the small island of St. Tudwal, marking the north end of Cardigan Bay