I was offered a Deck Officer Cadetship with Trinity House during the early months of 2014 after going through the selection process. I am extremely grateful to have received this offer as it has enabled me to progress towards becoming an Officer of the Watch subject to passing the MCA orals which I am about to sit. The purpose of this article is not only to express my gratitude for the wonderful opportunity this scholarship has afforded me, but also to provide feedback on the training I have received thus far.

I joined Warsash Maritime Academy in September 2014 as a Phase 1 Cadet; Phase 1 lasted from September 2014 until December 2014. During this phase I received a basic introduction to various aspects of ship life including general ship knowledge, ship and port operations and basic navigation. In addition there was a lot of maths which stresses the importance attached to mathematical aptitude during the selection process.

Before being allowed to go to sea, I had to complete a number of short courses including Security Awareness, Personal Safety and Social Responsibility, Personal Survival Techniques, Fire Prevention and Fire Fighting and Elementary First Aid. During these short courses I was given details about the first ship I would be joining, the Stena Europe, a ROPAX [roll-on/roll-off passenger] ferry.

I joined this ship early in December 2014 and was on it until the end of January 2015. It was a short but difficult contract. As it was my first ship, I was apprehensive. It wasn't easy having to cross the Irish Sea twice a day in the middle of winter with 50 knot winds on a regular basis. It certainly was a ‘baptism of fire’! This was also the first time I had spent the Christmas period away from my family. Even though this ship was not my favourite I completed it without any doubt in my mind whatsoever. I proved to myself that if I could thrive on this ship in pretty terrible conditions, I shouldn't struggle with any other ships in my future.

Al Bahia is a United Arabic Shipping Company (UASC) container ship with Russian officers and Filipino crew. The crew were all very kind and welcoming and I settled in well right from the beginning.

There was much more excitement to this ship as I got to sail around the Mediterranean Sea and the Arabian Sea as well as two Atlantic crossings. It felt a lot more like what I imagined a ship should be.

I got a lot out of it in regards to navigation as well as loading/unloading a container ship.

After completing my second ship, I had a few weeks off before going back to Warsash to continue the next stage of my training. I learnt the bulk of the course during Phase 3 which included stability, meteorology, celestial and terrestrial navigation, tides, rules of the road, ship handling, law and management and navigational aids. I was at Warsash from May 2015 until December 2015, with a one month break during August. After multiple exams and assignments, I was pleased to get all the results I had hoped for which gave me a lot of confidence going into my next and final sea phase, Phase 4.

As it was getting close to December, I was curious to find out what ship I would be on next. I was pleased to learn that I would be joining MS Boudicca, a Fred Olsen passenger ship. I joined this ship on 21 December 2015 and was on it for four and a half months.

This was the longest contract but I was quite happy to experience a long contract away from home to see how I would cope.

During the trip, I was very lucky to do a cruise around Africa and the Indian Ocean. This was the highlight of my sea phase as I got to see and do some amazing things. I was lucky enough to visit destinations such as Namibia, South Africa, Seychelles, Madagascar, Zanzibar, Mauritius and many other beautiful places.

I enjoyed being able to apply a lot of the knowledge I had learnt over Phase 3 to real life situations and this enabled me to get a real feel for the job.

I left MS Boudicca in April 2016 and had about five weeks off before joining my penultimate ship, HMC Searcher, a UK Border Force ship. When I discovered I was joining this ship I was very unsure what to expect as it is not a ship that cadets normally get to experience. Indeed I wasn't sure if I would enjoy it, which was ironic because it turned out to be the most enjoyable ship I had been on!

HMC Searcher was the smallest ship I had been on by far. After a few days on board, I immediately got the sense that the ship had a really nice ‘family’ feel to it. Due to the lack of space you spent most of the day together, this even included cooking meals for each other. It was a great experience to see what the UK Border Force do and I found the whole job really interesting. It was nice to be accepted into the ‘family’ very quickly and was given lots of help by the Captain and the officers in progressing my training. I was quite disappointed that I was on the ship for such a short period of time from the beginning of June and finishing mid-July; I think I would have benefited from a longer stint.

Once I finished my contract on HMC Searcher, I joined my final ship, Commodore Goodwill, 10 days later. Commodore Goodwill is a RO-RO ferry with British and Eastern European officers and crew. What was different about this ship compared to other ships was the watch patterns. They were seven hours on, five hours off, five hours on, seven hours off. This was a watch pattern I had never done before and it took a little while for my body to adjust.

Commodore Goodwill was my fifth and final ship and it proved a very good final ship. I was given lots of responsibility with regards to maintaining a navigational watch, which included crossing the English Channel every day, but also mooring operations, cargo operations and maintenance of life saving appliances and fire fighting equipment. I was able to complete my Training Record Book and get lots of practical experience with the help of the Officers and Captain.

After 12 weeks on board, which felt like a very long time considering this was a ferry, I was finally finished. I had completed my 12 months of Sea Service and was ready to go back to college for my final phase, Phase 5.

It was nice to have a six week break before going back to Warsash in November 2016. Once I got back to Warsash, I was straight into doing more short courses. I completed a number of courses including NAEST Operational, which is a bridge simulation course, the Efficient Deck Hand course, Proficiency in Medical First Aid and GMDSS. I will be completing the remaining short courses in July 2017, which includes Advanced Fire Fighting and Proficiency in Survival Craft and Rescue Boats.

I had two weeks off for Christmas before going back to Warsash to start preparing for my SQA Exams. There were two exams, Navigation and Stability and I was delighted to find out only recently that I had passed both. I am currently studying for my MCA orals and completing my HND Part 2. Should everything go to plan, I hope to be qualified by August 2017. My aspiration is to get a third officer position with a cruise ship and subsequently I hope to work towards gaining my Chief Mate’s certification.

I am extremely thankful to Trinity House for sponsoring me and giving me the opportunity to start an amazing career in which I hope to continue progressing for many years to come.

Ben Ashley and his fellow cadets 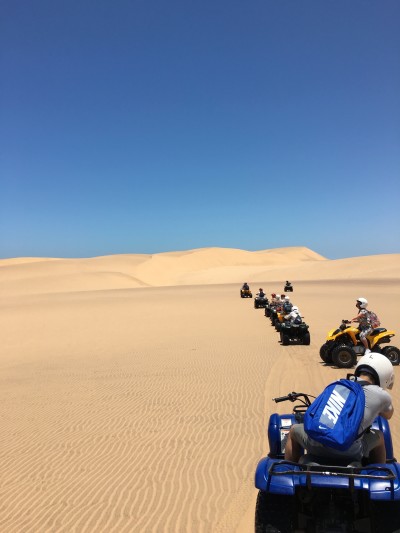 Crew excursion to the Namibia Desert

Sea to Land: How the Merchant Navy Opens Doors