How do rock lighthouses behave when they are pounded by giant waves? Anecdotal evidence from the archives and contemporary observations by Trinity House staff suggest particular responses, but to date very few measurements have been made. All that changed in 2013/14 when the Eddystone Lighthouse was instrumented to record the wave runup and subsequent motion response.

The frustration of having no wave impact data on which to base lighthouse designs was expressed by Alan Stevenson in 1848:

“No systematic or intelligible attempt has been made practically to measure the force of the wave, so as to furnish the Engineer with a constant to guide him in his attempts to oppose the inroads of the ocean.”

In fact Alan’s brother Thomas invented an instrument – the Marine Dynamometer – to record impact pressures. It was deployed on both Bell Rock and Skerryvore Lighthouses and provides rare measurements of impact pressures. But of the motion response of these towers, nothing is available. Anecdotal evidence includes a “loud booming noise”, “chinking of glasses in cupboards”, “oscillation…similar to minor earthquake”.

But what is actually happening to the structure? A pilot project on the Eddystone Lighthouse hoped to reveal some of the secrets.

Trinity House teamed up with Plymouth University who have been at the forefront of field-based wave loading on structures since the 1980s, contributing to the BS6349 Part 7 Design Guidance for Breakwaters and leading the design of novel wave impact pressure-aeration units on Alderney Breakwater.

Eddystone Lighthouse, having line of sight to the university campus, was deemed to be a perfect candidate for such an investigation. There would be severe constraints to traditional monitoring methods due to its remote location, low power availability and the hostile environment. Rather than the standard methods of determining wave impacts by fixing pressure transducers to the outside, a pragmatic approach was devised comprising video cameras and geophones. 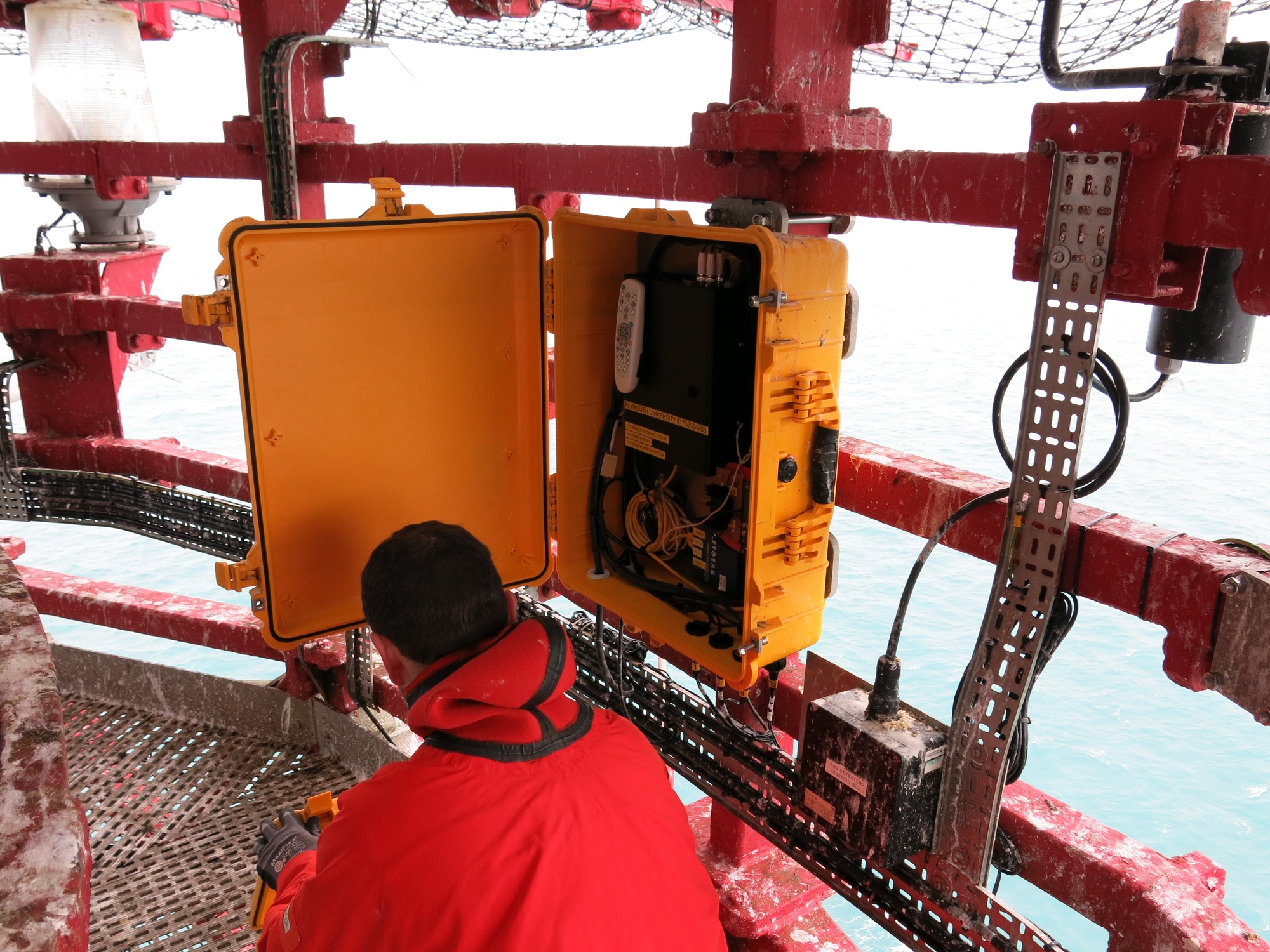 Four video cameras were fixed to the helipad supporting structure, arranged to provide views around the entire perimeter.

Two of the cameras focused on the prevailing southwesterly wave direction – one near-field and one far-field. The cameras were remotely controlled via a wireless bridge to the university, enabling them to be activated when nearby buoys indicated significant wave activity. Furthermore, when waves were detected on the cylindrical based of the tower, the acquisition speed increased from 1 fps to 5 fps. Meanwhile, two geophone units were placed within the tower itself. More often used for seismic applications, they would provide motion response information. They were battery-powered, sending activity alerts via the GSM mobile phone network when the tower motions exceeded a certain threshold, controlled remotely.

Deployment was undertaken by university technicians in the summer of 2013. October 2013 storms came and went, with no alerts being sent from the geophone systems (causing a little concern about the effectiveness of the method). However, just before Christmas that year, the first of a system of twelve storms rolled in and around 3,000 individual motion events were recorded over a couple of months.

Short-duration velocity-time histories obtained from the geophones could be integrated to obtain displacements of the tower (which were never more than a fraction of a millimetre) and differentiated to obtain accelerations (the largest of which were comparable to earthquake events). Comparisons with video images led to the identification of different wave impact types, governed by breaking distance from the tower.

Also, transforming the geophone data into the frequency domain enabled modal information on the tower response to be obtained.

However, just before Christmas that year, the first of a system of twelve storms rolled in and around 3,000 individual motion events were recorded over a couple of months.

The response of the tower was found to be affected by the wave height and period and complicated by the instantaneous water level, a wave being unable to hit the tower in its most energetic unbroken form unless there is sufficient water on which to ride. The angle of the incoming wave was also a big factor at the Eddystone due to the specific bathymetry on which it is built. In parallel with the field monitoring a Finite Element Model of the Eddystone Lighthouse was constructed. This would be validated by the geophone data and provide an insight into the structural behaviour at locations other than those where the geophone systems were located. Data for the lighthouse materials were obtained from archive sources and the De Lank quarry in north Cornwall from where much of the granite was sourced.

With the model successfully validated, agreeing with the fundamental frequency of the tower to within a few percent, an estimation of the stability of the Eddystone was undertaken. Wave loads were based upon methods provided in ISO 21650 Actions from wave and currents on coastal structures using wave buoy data and video images. Analysis suggests that, as expected, the Eddystone Lighthouse is stable for material failure, sliding and overturning. Even without a thorough knowledge of the wave load in their design, the great engineers of the 19th century built structures capable of withstanding these harsh conditions. 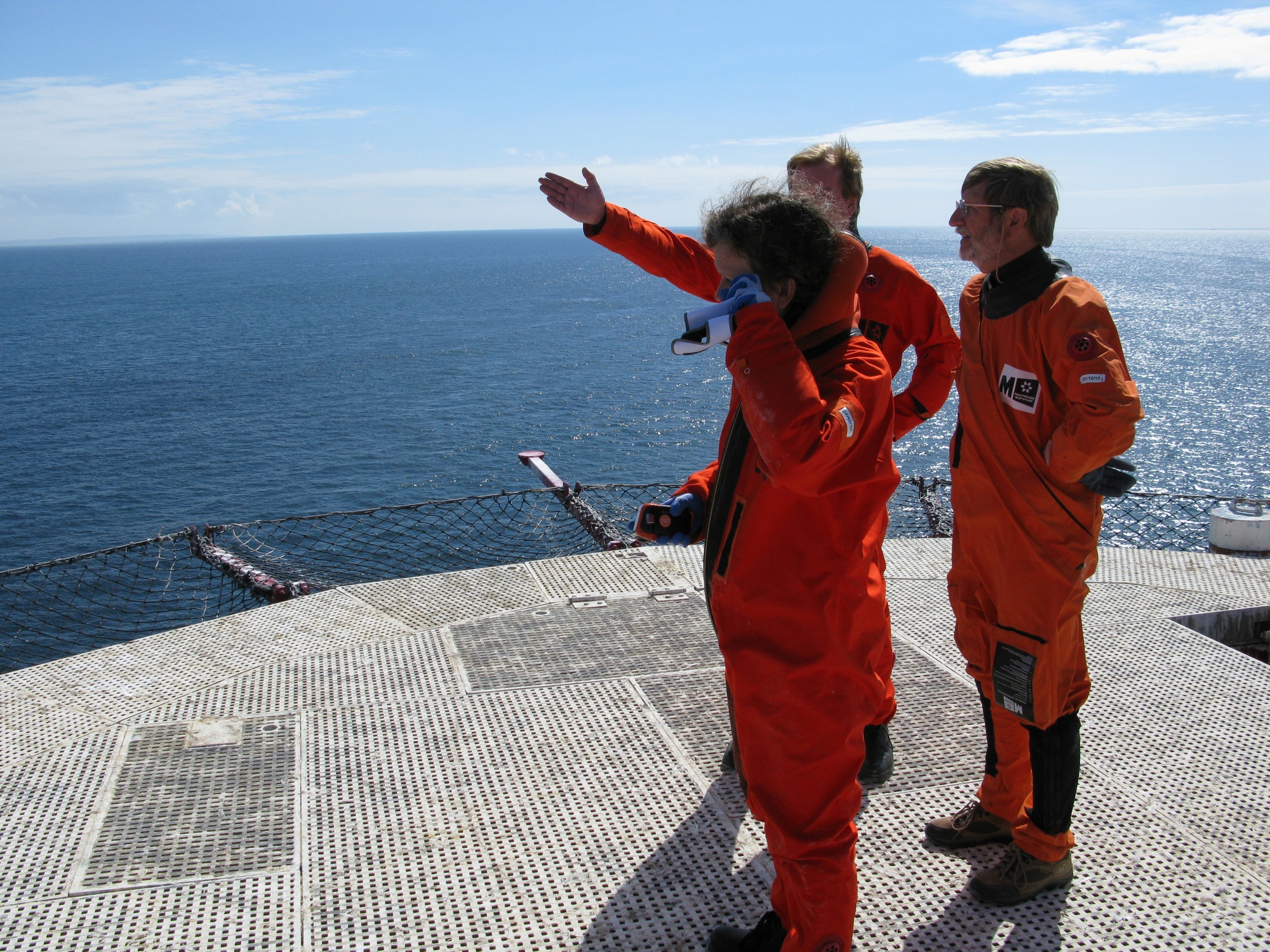 Next steps are to take methodologies and findings from this pilot study to more exposed lighthouses of the General Lighthouse Authorities (GLAs). Funding for project STORMLAMP (Structural behaviour Of Rock Mounted Lighthouses At the Mercy of imPulsive waves) has been secured from the UK Engineering and Physical Sciences Research Council and will commence in Spring 2016.

It will further develop combined physical and numerical modelling for both wave loading and structural behaviour that will be validated by direct measurements of full-scale performance. The tools and extended full-scale observations will provide the means for the GLAs to manage lighthouse structural condition and safeguard their role. 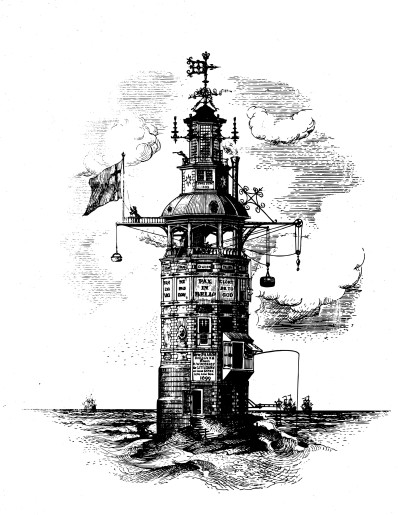 Eddystone Lighthouse was built by Trinity House in 1882, the fourth lighthouse to mark the small but dangerous Eddystone Rocks 13 miles south west of Plymouth

A selection of features that have appeared in Flash magazine