The Support Vessel Service is an invaluable part of the organisation, carrying out a huge amount of routine work each year while also always ready to respond to wrecks, new dangers and aid to navigation (AtoN) casualties.

2017 was as busy as ever and a number of large-scale projects were completed all around our coast, utilising helicopter support to carry out major upgrade work and deliver supplies and equipment to challenging offshore locations.

Both tenders were dry-docked at a shipyard on the River Tees for routine maintenance and repairs. THV Galatea was docked in February and underwent surveys and repairs, returning to service mid-march, where she was immediately tasked to attend a Racon Casualty at the Inter-Bank Buoy in the Dover Strait, one of the key Type 1 buoys.

THV Patricia underwent her intermediate docking in October and returned to service in November. She was tasked immediately out into the North Sea for the annual east coast rig inspections, where over 125 offshore installations were inspected with the Inspector of Seamarks to ensure lights, fog signals and name boards were all correct. This is an essential part of the Navigation team’s work along with inspection of local lights in ports and harbours which is reported annually to the Secretary of State.

In April THV Galatea assisted with the Mumbles Lighthouse update project. Galatea berthed at the Swansea outstation and loaded all the tools, equipment and materials that were to be delivered to the station, which included fuel tanks, fencing, cabins, beds, a generator, batteries and all the AtoN upgrade equipment. The tri-GLA helicopter ‘G-GLAB’ rendezvoused with Galatea in Swansea Bay, and over the course of two days the vessel, aircraft, crew and technicians worked together to deliver over 86 under-slung loads from the ship to the lighthouse. Once the equipment had been delivered, Galatea departed with the aircraft on deck for their next tasking at Smalls Lighthouse.

Throughout this project the TH team was also assisted by contract launch MV Mair which provided access to and from the station while the upgrade work was completed.

Early in the year THV Patricia attended with Technicians from Field Operations East, loading equipment in Harwich and making a rendezvous with G-GLAB at the station for the transfer of technicians. A new generator was under-slung to the station in readiness for technicians staying on the station later in the year. Crew members from Patricia were flown across to the station and in conjunction with the technicians, all was completed promptly on what was a very windy day, some 30m above the English Channel.

Later in the year it was Galatea’s turn to assist at Royal Sovereign, and in fair weather conditions the vessel used her advanced Dynamic Positioning System to take up station just metres from the lighthouse. This enabled her to lift several loads of equipment and tools from the ship to the lighthouse platform, without the need for helicopter support. Taking advantage of the conditions, Galatea also passed a water hose across to the lighthouse and replenished the station with over 20T of potable fresh water.

A major modernisation project took place at Sark Lighthouse in the Channel Islands. This station is built into the side of the cliff and presented a major logistical challenge to deliver all the equipment needed, as the only traditional access is down a steep flight of stairs from the top of the cliff.

After months of planning, THV Galatea (pictured below with helicopter) was loaded at Harwich with a considerable amount of equipment for the refurbishment of the station and the sustainment of the engineering team during the project and made passage for the Channel Islands. Once again, Galatea and the helicopter worked in tandem with the technicians to deliver 61 under-slung loads between the ship and the lighthouse as part of the mobilisation phase of the project. 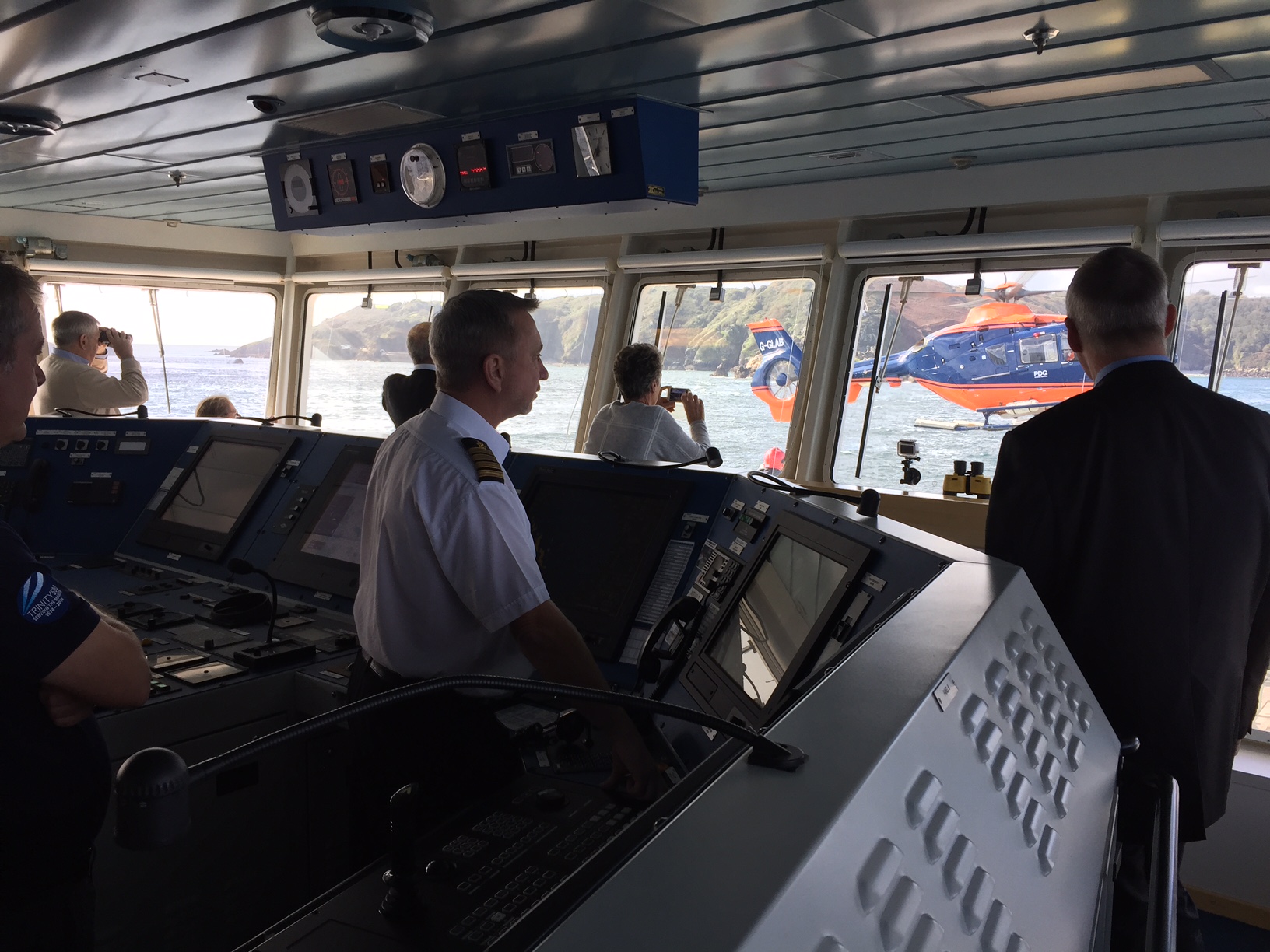 The project to remove and replace the 60 year old Raymond and Cressar beacons in Penzance Bay were commenced this year; Cressar is incomplete at time of press but will resume in March 2018. The MV Mair—pictured below and ideally suited to operating in shallow waters close to the rocks—provided the platform from which these works were carried out. The engineering team was transferred to the stations via inflatable boat, and both the beacons were replaced.

The tide limited working time on station and everything needing to be secure through each successive high water when the team had to depart. In the latter stages of construction and painting, the high tide was used to reach the upper section by boat. It was essential that the design accommodated the method by which the structure would be constructed on site. The new beacon was designed and manufactured in-house, with all components designed to be man-portable as all would be transferred by boat and manhandled on site. 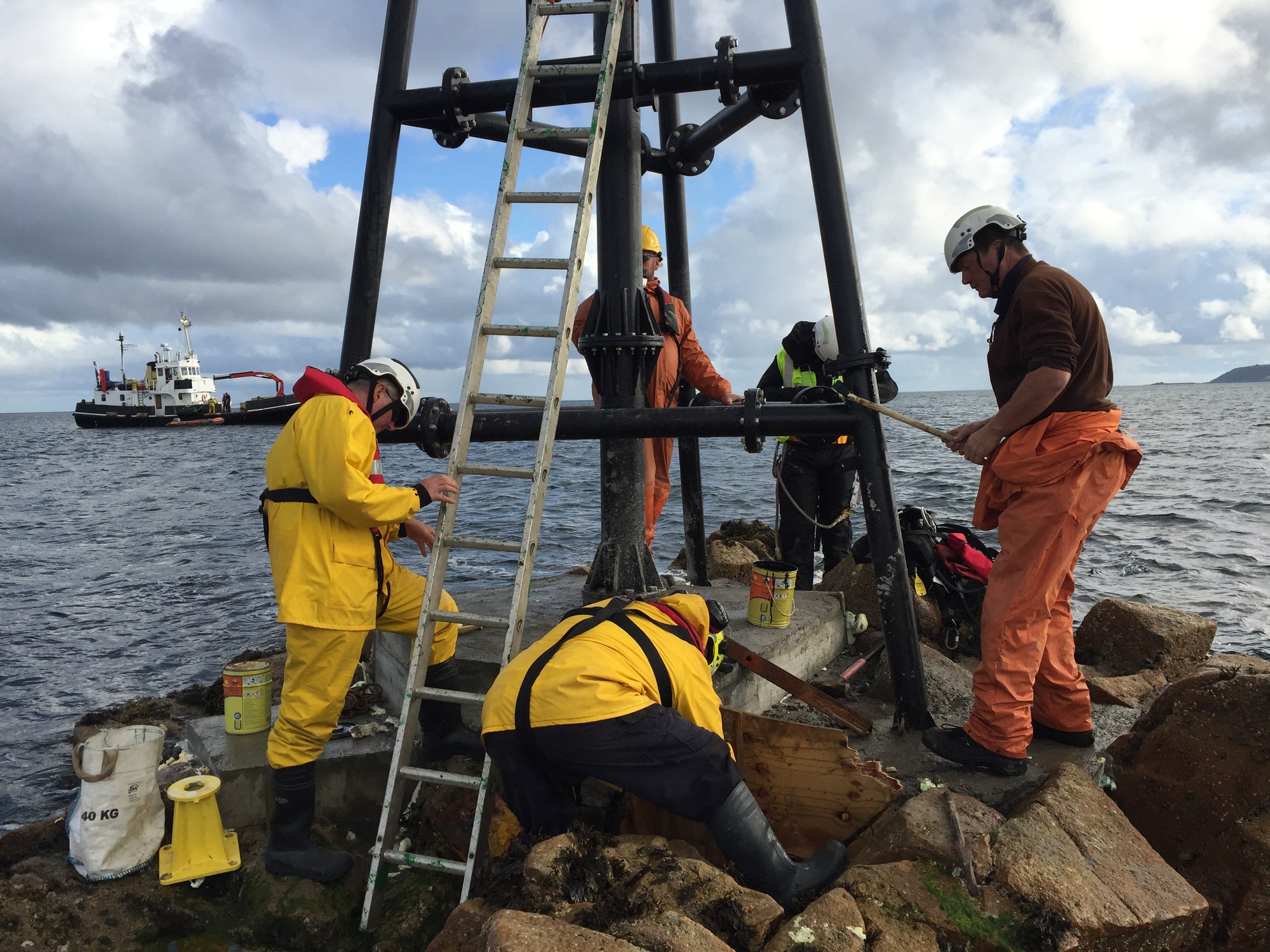 This article originally appeared in the spring 2018 issue of Flash 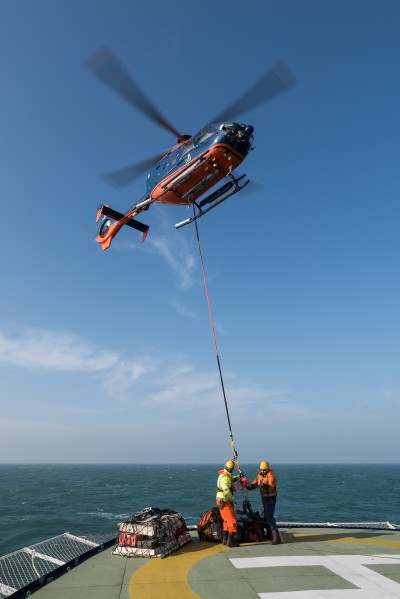 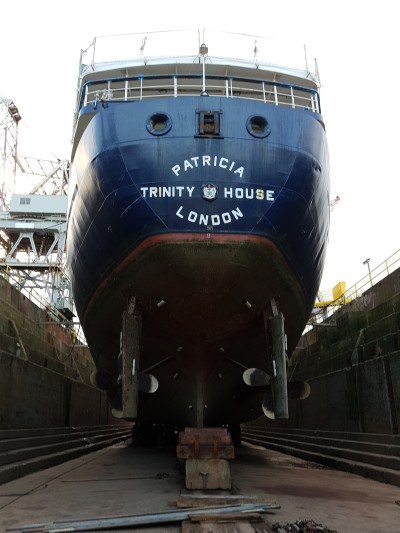